During the month of August, three Nature Trust staff members, one summer student and two volunteers traveled to Seal Island to complete a baseline survey there. We use baseline surveys to thoroughly investigate and describe what is on a property when we acquire it, including both ecological and cultural attributes. Each baseline survey includes a thorough assessment of the biological, physical, and cultural features of a property as well as natural and/or structural hazards present and a  photo record of what the property looked like when we acquired it. This process allows us to identify the important conservation features on a new property and the threats to those features. Baseline surveys provide the foundation for developing a stewardship plan for how we’re going to care for our new property in perpetuity. 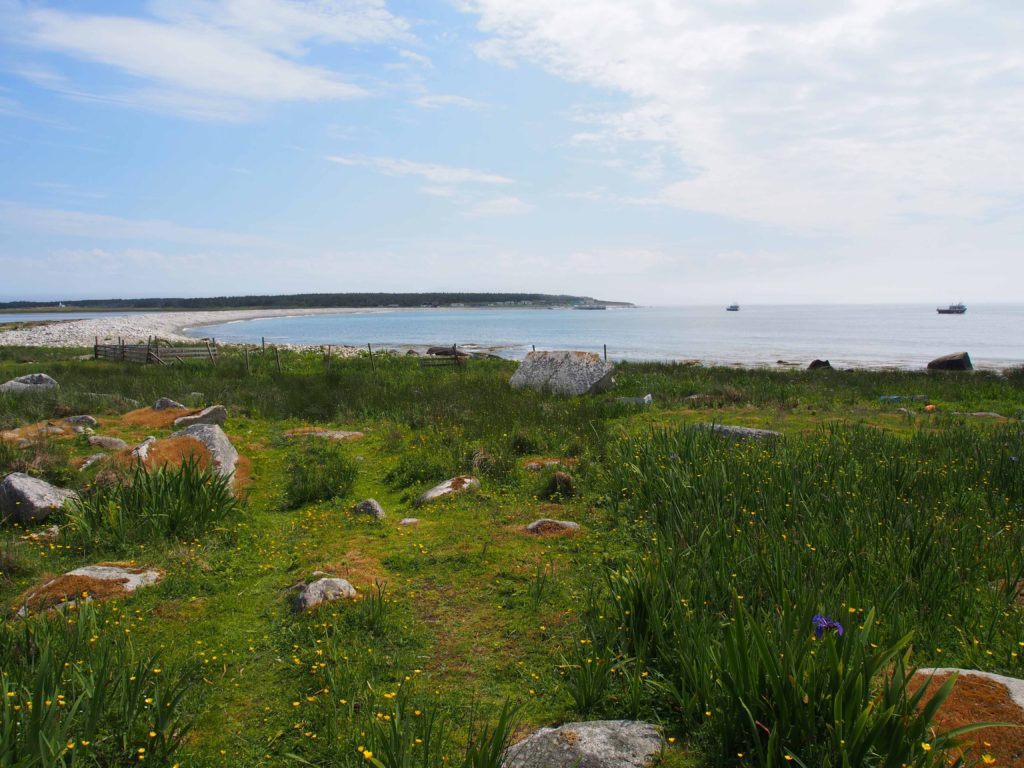 In the spring of this year, the Nature Trust acquired 80% of Seal Island (over 600 acres), and we knew that in order to complete all the necessary fieldwork there, we would need help from volunteers. Not only did we need volunteers with a good knowledge of Nova Scotia flora and fauna, the Seal Island baseline survey also required volunteers who were willing to wade through shrubs, bogs and downed trees, and who would come back after a long day wet and scratched and still be willing to go out the next day. We found the volunteers we needed in Burkhard and Ingrid Plache, who cheerfully tackled raspberry thickets and bogs alike with equal proficiency. 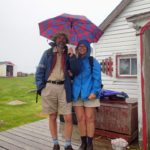 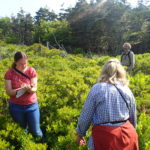 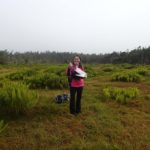 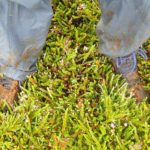 Alternately shrouded in fog and gleaming in the sun, Seal Island showed us the best of what old-process coastal forest can look like. The forest floor was cushioned with mounds and hummocks of green moss, the spruce and fir were ghostly with Old Man’s Beard lichen, and amongst the moss grew hundreds of tiny orchids. We found six species of orchids on the island, but by far the most common on the island were the understated, Blunt-leaved Bog orchid (Platanthera obtusata) and the dainty, Heart-leaved Twayblade (Neottia cordata). Neither is brightly coloured, as people often think orchids must be, but on an island with a small variety of plant species, they are a beautiful addition. 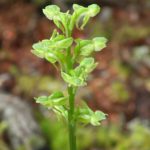 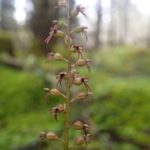 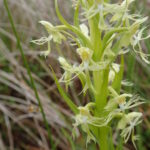 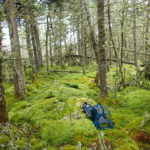 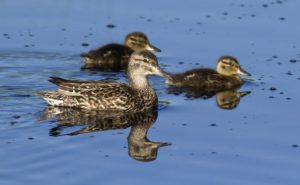 Seal Island is known as a prime bird-watching location among Nova Scotia’s birders. This is because of its location 32 km offshore from southwestern Nova Scotia. Birds that are migrating through or who get blown adrift by a storm arrive there because it is the nearest piece of land, either the first safe haven they’ve seen or the last place to stop and fuel-up before a long flight south. As a result, rarities such a Green-tailed Towhee and a Scissor-tailed Flycatcher have shown up there, far from their home range. We visited outside of migration season, so we didn’t see a long list of rarities, but there were still White-winged Crossbills singing and a variety of ducks (American Wigeons, Gadwall and Green-winged Teal among them) raising ducklings on Big Pond, the biggest of the barachois on the island. There was even a Barn Swallow pair raising a family in an old, abandoned camper van!

Conversely, the island also showed us how human influence can modify the ecology of a place, especially a coastal island. Seal Island has had a number of introduced species over the years, and as a result, it is now wildly overpopulated with snowshoe hares. With few predators, the hares (which generally prefer thickets) have taken to feeding in the open and have browsed the regenerating spruce to the point that they are stunting their growth. Sheep, too, have lived on the island for 150 years and do their fair share of lawnmowing for the folks who live on the island seasonally- but as a result of their introduction, there are a number of European species of plants on the island, and much of the coastline is grazed-down pasture instead of forest. 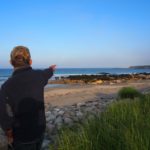 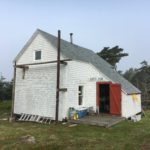 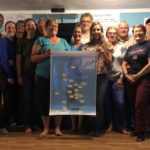 There are two distinct villages on the island known as the West Side and the East Side. Together, these two villages comprise a vibrant community of seasonal residents —many of whom have been connected to the island all their lives. Enter the second purpose of our trip, which was to begin to get to know some of the community members better.  Nature Trust staff members Jessica and David went visiting house-to-house to ask Seal Islanders about what they valued on the island, both tangible and intangible, and how they would like to see the island cared for.  The community gave us an extremely hospitable welcome, offering us beds, a boat ride to and from the island, and a great deal of interesting history.  We felt graciously welcomed in the finest South Shore fashion and look forward to meeting those who weren’t on the island at the time.

Seal Island is a rich place, both culturally and ecologically, and it’s safe to say that we were enriched by our visit there. We are looking forward to celebrating the conservation of Seal Island in Clark’s Harbour later this weekend (details here), as well as further building good relationships with our new neighbours, as we work together to ensure that Seal Island is well cared-for, in perpetuity. 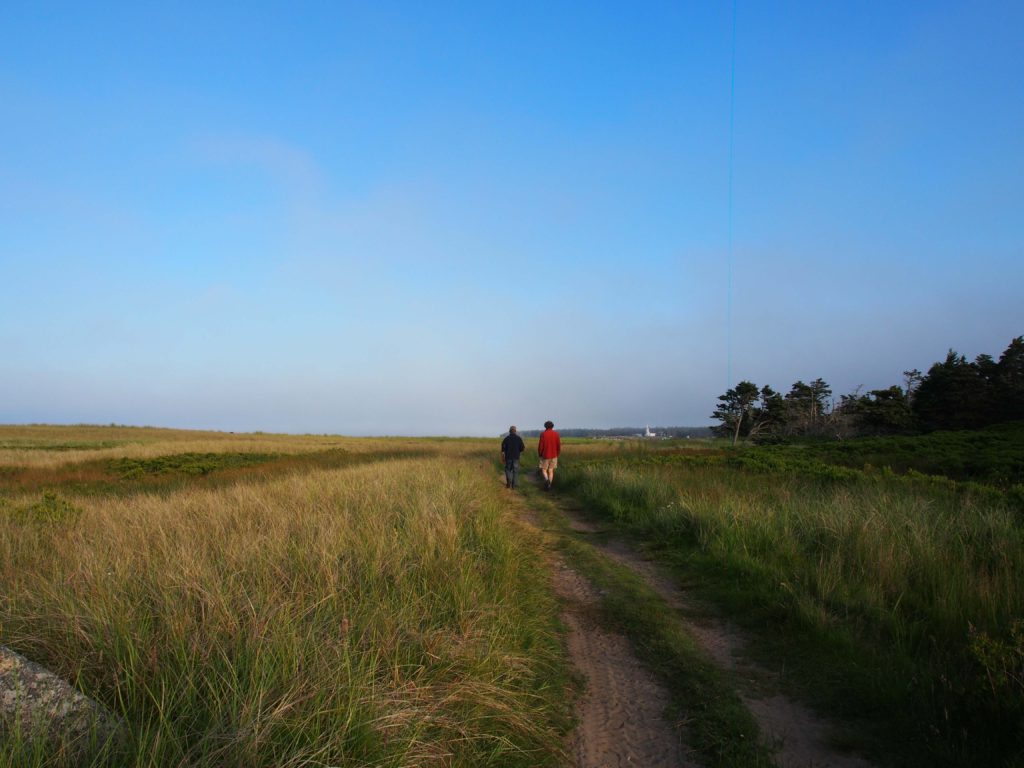