We are proud to announce that we have successfully added 40 hectares (99 acres) to our growing Plaister Cliffs assemblage of protected lands along the Bras d’Or in Cape Breton. 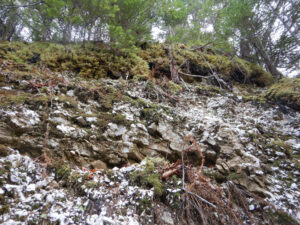 Gypsum karst crumbles in the landscape of the new property.

This area is well known for the “plaister,” or gypsum, that forms the basis for a globally rare, fragile, and fascinating karst landscape. Karst landscapes are formed from the dissolution of soluble rocks and are characterized by underground drainage systems that form otherworldly above- and underground terrains of sinkholes, caves, and escarpments.

Most karst around the world is formed from limestone, but here in Nova Scotia our most common karst is gypsum. In fact, according to renowned cave biologist (and Nature Trust supporter) Max Moseley, Nova Scotia likely has the largest and best developed areas of gypsum karst in Canada, and amongst the best in the world. The gypsum karst in Cape Breton is particularly well-developed – meaning that it is “full of holes coalescing, like a honeycomb with ridges in between,” says Max.

This “highly three-dimensional landscape,” as well as the alkaline environment created by the dissolution of the gypsum itself, attracts a specialized range of fauna and flora that rely on these characteristics to thrive.

The new property is located within the UNESCO Bras d’Or Lake Biosphere Reserve and also connects two parcels of the provincially protected MacAulay’s Hill Nature Reserve. This growing assemblage is one of the Nature Trust’s signature projects for the Twice the Wild campaign currently underway, which aims to double the amount of land we protect across the province by 2023.

This project was made possible by the Natural Heritage Conservation Program–Land Trusts Conservation Fund, an initiative funded by the Canada Nature Fund.