Based on a story written by Andrew Robinson, Nature Trust volunteer writer 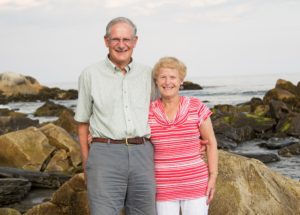 “We’ve supported the Nature Trust for a number of years,” Chris explains. “Our first major involvement came when my brothers and I were deciding the future of lands my grandfather had originally purchased back in the 1920’s. He was a sea captain, and he and my grandmother lived in Bermuda. My grandmother was from Halifax and she loved her home, so they bought land in the Purcell’s Cove area and built a summer cottage to escape the heat of Bermuda. As children, whenever we visited my brothers and I would go off to explore the backlands, and swim in Purcell’s Pond.”

The Purcell’s Cove Backlands held such a special place in the hearts of Chris and his brothers that they knew they had to take steps to ensure the preservation of the lands forever. “Mum passed the lands to my brothers and me during her lifetime,” he said. “She wanted the lands protected, but she was initially a little concerned about deeding the property to the Nature Trust. However when we sat down and talked with Bonnie Sutherland, we all knew donating the lands to the Nature Trust was the best way to be sure these lands would never be developed, and future generations would always have access to these fabulous barrens. Mum was so pleased that the Nature Trust recognized her father in naming the lands the Captain Arnell Conservation Lands.” 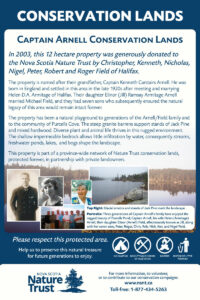 This was in 2003, and since then Chris and Hiya have been regular supporters of the Nature Trust. They made a donation in memory of Chris’s mother; they have donated to several campaigns including the 100 Wild Islands and Twice the Wild, and are also active in other ways.

Chris grew up with the outdoors as his playground, but didn’t really fully appreciate the natural world until much later. Christ notes, “In fact, it was when we were on a sabbatical in Switzerland. My work-colleague was a passionate birder and he introduced me to the hobby. I was fascinated, and we spent a lot of time together exploring this new world. His passion infected me and I’ve been hooked ever since.”

“He’s even got me a little bit hooked,” laughs Hiya, “Although I’m not at his level! I love being outdoors though. As with Chris, I grew up in nature. For me it was a New Hampshire apple farm! Having spent a number of years working in the field of social work in cities, I really appreciated getting away to the trees and lakes.”

“I believe the work of the Nature Trust is vitally important,” Chris said. “We have to preserve the places where nature can develop as it should, and where people can enjoy and appreciate their natural world. Think of the children growing up today, their children and their children’s children. Wouldn’t it be sad if they could not experience the same beauty and awe that we do when we step out into a pristine natural environment? That’s why we support the Nature Trust, and that’s why we chose to become Champions of the Wild.”

Learn more about our Champion of the Wild donor group, or contact Barbara Haley to join!