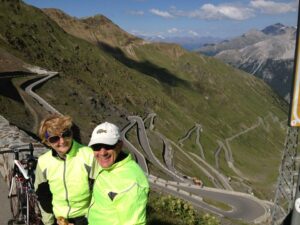 Bob Williams and Glenda MacKinnon on Summit of Stelvio

Bob Williams has always had an affinity for nature and the outdoors. He was brought up in the country, in an environment where forests, streams, and wildlife were only a short walk away. As he grew, his outlook expanded from simple personal enjoyment to include a concern for the preservation of wild and beautiful places. In later years his life became more and more entwined with his concern for current land use management as well as scientists’ warnings of increasing carbon emissions and the effect on climate change. And lately, he has been haunted by this persistent question: how can one make a difference?

In 2014, he learned of the Nova Scotia Nature Trust and their work to preserve land and habitat for endangered species (and for people too). The Nature Trust impressed him enough that he made his first sizable donation, which helped save habitat for the endangered Blanding’s Turtle.

As he says, “That was the first of many donations that has gone to the Nature Trust. Their devotion to preserving the natural wonders of Nova Scotia’s land and its biodiversity is wonderful. Being part of that process provides me with a sense of accomplishment and permanent results. It goes hand in hand with my concern about climate change.”

As Bob explained, his lifestyle has always been one of adventure surrounded by nature. Upon moving to Nova Scotia, he purchased a mountainous tract of forest land on which he built and operated a maple syrup operation, now known as Sugar Moon Farm. As the land was quite secluded, he lived ‘off the grid’ for the first 10 years.

After retirement, he wanted to see more of Canada—and did so by bicycle! Bob called the cross-country trip from Vancouver, British Columbia to St. John’s, Newfoundland ‘a life changing experience’. Over the next 15 years, he and his wife Glenda have spent a significant amount of time touring by bicycle through some of the most interesting and beautiful regions in the world.

During the past few years, he became more serious about ‘making a difference’ and sought opportunities to direct funding to like-minded organizations. He chose to start immediately based primarily on the urgency to address the preservation of the natural world and ever encroaching destructive effects of climate change. As Bob states, “For that to happen, it was important to have a plan.”

His plan included three steps: First, identify how much annual funding can be made available without having an impact on future personal and family needs. Second, identify the organizations to be supported. And third, research and choose option to achieve philanthropic goals while minimizing taxes. To this end, he established a Donor Advised Fund (DAF) with a financial organization specializing in Charitable Giving. The name of his fund is ‘Embracing Climate Change.’

The fund and associated program is now in its third year and Bob is happy to report that all is going well. He also noted that the Nature Trust is a significant organization within his program in that the donated funds can be targeted to direct land purchases or individual programs. For example, he chose to support the Nature Trust’s campaign to protect Twice the Wild through his fund, to help the Nature Trust double their protected lands.

The Nature Trust announced at the beginning of December that they had reached their financial target to unlock all available matching funds for Twice the Wild. Bob says, “I’m particularly happy and proud that ‘Embracing Climate Change’ had a significant impact on an early success for this campaign. Congratulations to the Nature Trust and all their donors for their work and contributions. Working in conjunction with the Nature Trust continues to be a pleasurable and rewarding experience!”