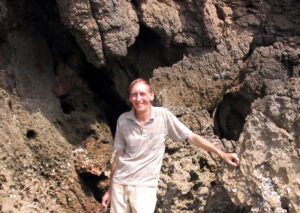 Max Moseley is an independent cave biologist whose work focuses on cave-associated fauna in Maritime Canada, North West England, and peninsular Malaysia. His research interests also include gypsum caves and karst topography – making the Nature Trust’s recent protection of gypsum karst sites in Cape Breton and mainland Nova Scotia particularly relevant. While these recent conservation successes are close to his heart, he had already added a bequest to the Nature Trust to his will. His planned gift will help ensure that Nova Scotia’s natural legacy, to which he has devoted so much of his life, will be protected forever.

When I first came to Canada in 1966, there was little public perception of the need for any kind of environmental protection. I even recall seeing a billboard somewhere in Halifax that said “Do you know what ‘ecology’ means?” Back then almost no one had heard the word ecology.

I grew up in the northwest of England, a region where outdoor activities are accessible and very popular. Among other things it’s the most important caving region in Britain. There, cave exploration is usually called ‘potholing’ because many of the caves are entered down deep vertical shafts which locally are called potholes. I was a very active ‘potholer’ from the age of fifteen until twenty-one when I came to Canada, and was on the local cave rescue team. But I was also keenly interested in natural history and while I was reading for my biology degree, I was spending many weekends collecting cave fauna as a hobby.

I immigrated to Canada in 1966 shortly after finishing my degree. After three years in the Liverpool of the ‘60s—the home of The Beatles, the Liverpool Poets, the Cavern club (appropriately enough!), taking the now famous “Ferry Across the Mersey” on my way to class—I was rather shocked by the snowy and seemingly bleak view out the window of the airport bus into Halifax. I almost turned around to go right back to England! But of course, I stayed, exchanging the Merseybeat for Don Messer’s Jubilee (which I loved).

Because of my interest in caves I started checking to see if there were any around here. I learned that, yes, there are and most are in gypsum. This was interesting: gypsum caves are much rarer than the limestone caves of my potholing days. But very little was known about them or about gypsum karsts in general. What little was known about the caves was scattered through many different sources, most of it done by amateurs and cavers from elsewhere, other than some research done by an Acadia professor, Dr. Sherman Bleakney, on cave fauna and the presence of significant bat hibernacula in the province.

I gathered a small group of people and took them out caving. After some time we formalized the group into the Nova Scotia Speleological Society. The NSSS did a lot to document our caves until it disbanded in 1980. 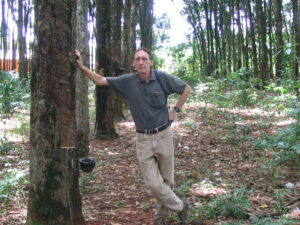 It was just a few years ago that one of my caving friends, David Sawatzky, suggested that I get in touch with the Nature Trust. I had been working in Asia, temporarily out-of-touch with the conservation scene in Nova Scotia, but David knew that I was mulling over my estate plans. At an estate planning seminar put on by the Nature Trust I learned that it is possible to designate multiple beneficiaries in a RSP or RIF. I also learned that designating a portion to one or more Canadian charities can direct money there instead of the entire taxed portion going to the government. My brother will still get the legacy I want to leave for him, but the balance will go to charities that I support.

I was very impressed by what the Nature Trust is accomplishing. The structure fits with my beliefs and past experiences about the way things should be done. Obviously I’m interested in the objectives, protecting our natural heritage, but I like that it is independent of the political process. Their conservation work isn’t directly affected by changes in political leadership or the results of elections. Naming the Nature Trust as one of my beneficiaries is something I can do that is positive: helping make sure that as much as possible of our province’s land and biodiversity are protected and preserved.

For over fifty-odd years, I’ve been investigating and documenting the cave fauna, caves and karst of Nova Scotia. So, of course, I am particularly keen to see gypsum karst areas protected. Now that I am in my seventies I am looking to what I can leave of value behind me, above and beyond the information that I hope others will be able to build on. Although the money I plan to leave is not designated for any specific Nature Trust project I am delighted that the Trust is now acquiring and protecting examples of these rare and remarkable landscapes. So hopefully I will be leaving a legacy that will help protect sites that have long been near to my heart.