Many rare and threatened species of plants and animals make their home on lands protected by the Nature Trust (that’s often a big part of the reason the land is protected in the first place!). But this winter, our Conservation Biologist made an amazing discovery: a lichen that has only been found at one other location in all of Canada! 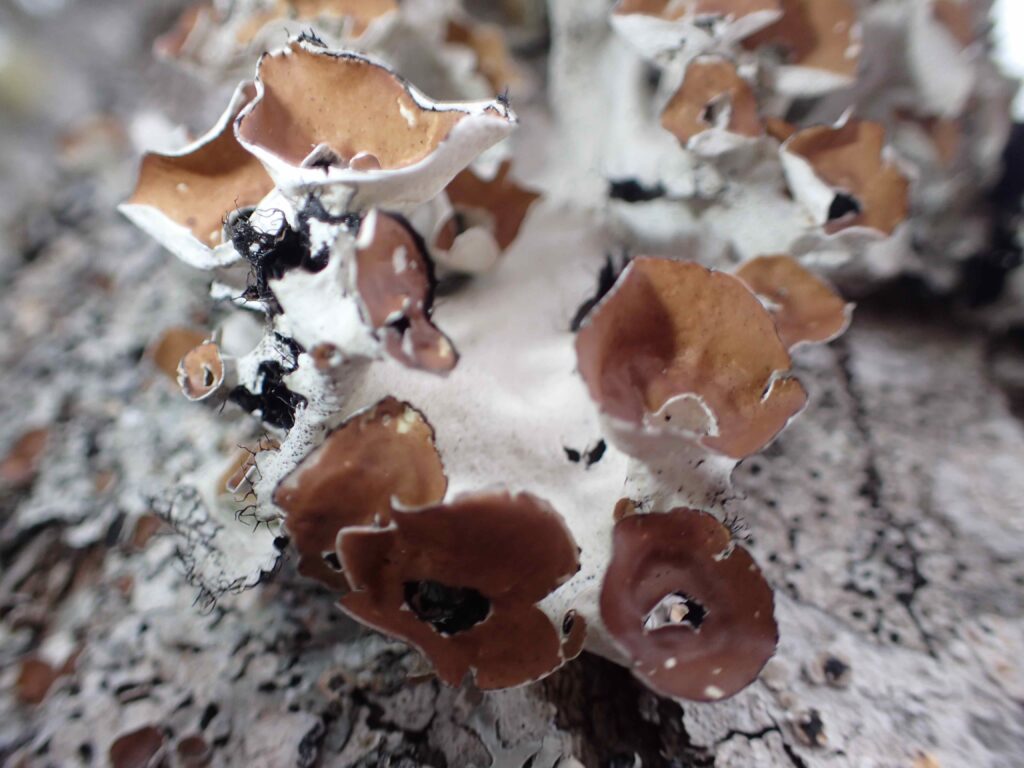 Perforated Ruffle Lichen (Parmotrema perforatum) has been described as “conspicuous” and even “showy.” It is a relatively large foliose lichen, with a pale greenish-grey thallus and broad lobes that are usually 10-20 mm wide. A distinguishing feature of the lichen is its relatively large brown apothecia (cup-like structures with a spore-bearing surface), each with a hole in the center, giving rise to the name “perforated.” In North America, it was only previously known from more southern locations, where its distribution is closely affiliated with the Southeastern Coastal Plain but also extends into several non-coastal regions.

The first occurrence of this species in Canada was recorded during a bioblitz for Kejimkujik National Park in 2016, when Alain Belliveau noticed an unusual lichen up in a tree on a small island in Kejimkujik Lake. As a professional botanist with the Atlantic Canada Conservation Data Centre at the time (he now manages the botany collection at Acadia University), Alain was able to recognize and tentatively identify this strange lichen, despite not having seen it before. With the help of Dr. Troy McMullin at the Canadian Museum of Nature in Ottawa, he identified this as the first confirmed sighting in Canada of Perforated Ruffle Lichen.

Then this past March, the Nature Trust’s Conservation Biologist Rich LaPaix was out performing a site reconnaissance at a property on Ponhook Lake that was being considered for protection by the Nature Trust, when he happened to notice a lichen suspiciously similar to that in the photos Alain had taken at Keji. Perforated Ruffle Lichen is often associated with hardwoods, and in this case it was found growing on several Red Maple trees along the shore. Rich took photos and a sample, which was sent to Alain at the E.C. Smith Herbarium at Acadia University for further confirmation and safe keeping.

Not only is Rich’s discovery only the second occurrence in Canada of this beautiful lichen, but at the time it was the only record outside an established protected area. The site has since been protected by the Nature Trust, as part of our campaign to protect Twice The Wild.

We’re proud to be able to protect land that provides habitat for all kinds of species – who knows what we might find next?