The race to save Troop Island has been won.  This ecologically unique and deeply cherished coastal island is now protected, forever.

The Nova Scotia Nature Trust and St. Margaret’s Bay Stewardship Association are celebrating today, after securing the deed to the 28 acres of Troop Island, a unique coastal island near the city of Halifax that was facing imminent development.

With little over a month to pull the community campaign and remaining funds together (a total of $820,000) since securing a last-minute option to buy the island, the stakes were high and the goal was ambitious. Yet, according to Ella McQuinn, a volunteer and past chair of the St. Margaret’s Bay Stewardship Association, “The support has been overwhelming, which speaks to the deep desire Nova Scotians have for protecting our coastline and special natural places.”

Troop Island has touched people not only for its beautiful beaches and shoreline vistas, but also for the rare and varied natural features. The old growth forest, intertidal marsh lands, bird life and freshwater pond represents a variety of ecosystems that are becoming more precious to people of every age.

Bonnie Sutherland, Executive Director of the Nova Scotia Nature Trust, added that the campaign seems to have resonated with all kinds of people. She said, “We’ve heard from people young and old, locals and people who’ve never even seen the island, all passionate about protecting special places like Troop Island.”  She added, “Our youngest “Troopers,” Nathaniel and Phoebe McLaren, donated the money from their pockets ‘to help Theodore Tugboat save the island!’” CBC’s television and storybook icon, Theodore Tugboat, had stepped up earlier in the week to support the conservation efforts, becoming the official captain of the Troop Island campaign.

Local businesses, community groups and families alike stepped up to support the campaign, and people reached out to friends and family and to contacts through social media, urging them to be a part of this legacy too.  McQuinn exclaimed, “It has been incredible seeing how far and how fast word has spread and support has come pouring in.  We even heard from decedents of the original Troupe family for whom the island was named, and they are thrilled that it will be protected for future generations.”

The St. Margaret’s Bay Stewardship Association and the Nova Scotia Nature Trust were grateful to the many people who come forward with very generous contributions of time and money that helped to preserve a unique piece of Nova Scotia’s coastal legacy.  The groups expressed hope that the passion and energy the Troop Island campaign generated will continue as the groups work together with the local community to steward this and other protected islands in the bay.

McQuinn added, “We hope too, that the incredible momentum that built around this campaign will continue to build towards protecting other coastal lands and islands in the bay and across the province.”

For those still wishing to be a part of the Troop Island campaign, donations continue to be welcome. Additional donations will help to build a stewardship endowment fund for Troop Island, providing critical funds to steward and protect the island, in perpetuity.

Troop Island is the 49th property protected by the Nova Scotia Nature Trust and is part of a growing network of over 6400 acres of outstanding natural areas protected, forever, for generations to come. 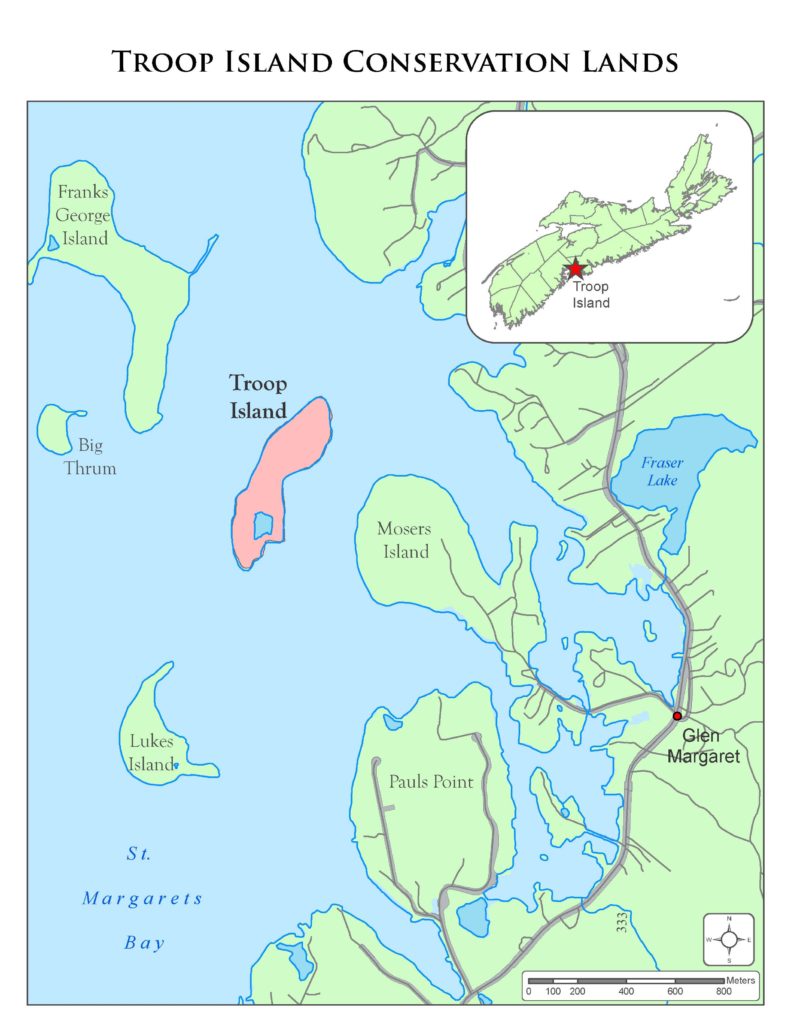