A short film featuring the Nova Scotia properties was shown yesterday at the event at the Natural History Museum in Ottawa. The film was made last week at a ceremony held at the Nature Trust’s Purcell’s Cove Conservation Lands. A commemorative plaque was placed on site, honouring the Nature Trust and landowners who donated the property for their role in conserving biodiversity and promoting conservation and stewardship.

Member of Parliament Andy Fillmore and Environment and Climate Change Canada representatives honoured two local families, the Fields and the Napiers, for their generous gift of nature. The donated properties include beautiful tracts of urban wilderness near Purcell’s cove, in an area known as the Halifax backlands. The Purcell’s Cove sites were two of six Nature Trust properties chosen to receive this national honour. 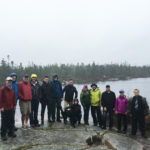 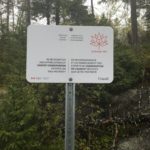 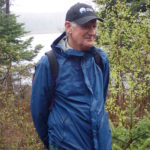 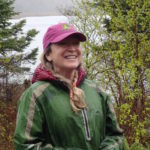 In celebration of Canada’s 150th anniversary, Environment and Climate Change Canada is recognising 150 properties that have been secured through the support of their funding programs and tax incentives. The initiative highlights how Canadians have been empowered to conserve ecologically significant lands, and contribute to the protection of critical wildlife habitats at the national scale. Their initiative recognises the critical partners who make such national conservation possible: the land trusts of Canada and conservation-minded landowners.

Jo Napier, one of the land donors recognised at the local event said, “We came together as a family to make this gift and I would encourage others families to make similar gifts. I think about how much richer it makes Canada as a country to weave that natural network together, especially in such a fast-paced world. To give others the gift we had growing up of slowing down, being still and at one with nature, is a wonderful gift.”

With 70% of land in Nova Scotia privately owned, including 85% of our coastline, the Nature Trust is encouraged that the federal government recognises the importance of protecting places that matter to Canadians, and that contribute to protecting biodiversity at the local and national levels. In particular, it is encouraging to see recognition of the essential role that private lands play in protecting biodiversity.

Bonnie Sutherland, the Nature Trust’s Executive Director said, “The future of Nova Scotia—how many wild places remain, how much access we have to our coast, whether there are pristine lakes and rivers to paddle and fish, or old growth forests to inspire us—depends on our success in inspiring private land conservation.” She added, “Families like the Fields and Napiers are leading the way.”

As Nova Scotia reaches its target of 13% of land protected, and competing demands rise on the remaining government-owned lands, private lands will become the best hope for conservation.

Federal tax incentives and funding programs, land trusts, and private landowners will all be an essential part of that success. New provincial funds and incentives are a logical next step for the province in fostering greater land conservation and leveraging the commitments of the federal government and land trusts.

The other Nature Trust properties and land owners honoured in this Canada 150 celebration include “Farley’s Ark,” a Cape Breton property donated by Claire and the late Farley Mowat is a beautiful coastal property with walking trails and beaches. Crow Neck Beach on the south shore provides critical habitat for endangered Piping Plovers. In southwestern Nova Scotia, the McGowan Lake Turtle Sanctuary protects habitat for the Blanding’s Turtle. The A.M Sandy Cameron Conservation Lands protect rare Acadian floodplain forest and contributes to an assemblage of protected habitat on the St. Mary’s River, important for salmon, Wood Turtles and a diversity of birds and other wildlife. Honorary plaques will be installed at these sites later in the year.