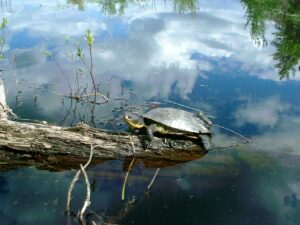 The Nature Trust has lined up another potential acquisition to protect turtle habitat. We are currently raising funds to acquire an additional 40 acres of land east of Kejimkujik. The site is a highly important one for Canada’s endangered Blanding’s turtles.

Blanding’s turtles are easy to spot with their dark, high domed shell, bright yellow chin and neck, and great big smile. But things aren’t actually cheery for these turtles—they are a turtle in trouble. They are at risk of extinction in Nova Scotia and across Canada. They are listed as Endangered under both the federal Species at Risk Act (SARA) and the Nova Scotia Endangered Species Act (NS ESA).

Habitat loss and fragmentation are the biggest threats to Blanding’s turtles. The same lakes, rivers and wetlands these turtles call home are increasingly popular for cottages and recreation. Since they travel big distances—they can travel over 6 kilometers to reach their nesting sites—and are slow crossing the road, cars are another major threat. 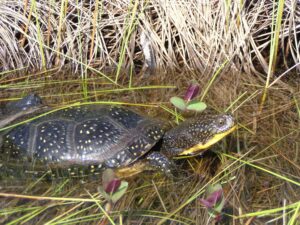 loss. Like humans, they are a long-lived species, living up to 80 or more years. And also like us, they are slow to reach maturity, not reproducing until their late teens or early twenties. Losing just a few adults can cause a population to decline significantly, and re-building that population take a very long time.

With only 1% of hatchlings surviving, a slow reproduction cycle, significant habitat loss and growing threats from cars, these turtles need our help.

The Nature Trust has just such an opportunity. We have the opportunity to acquire a highly significant turtle site that is known to support the highest concentration of the Blanding’s turtles in Nova Scotia, including a high proportion of young turtles, making it particularly important to conserve. 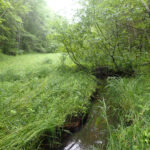 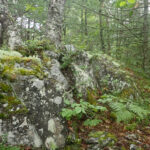 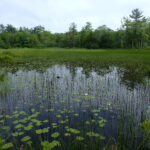 The 40 acre property has a diversity of habitats prized by Blanding’s turtles, including good overwintering habitat. It supports a large pond, marsh and tall shrub swamp. Many of the forest’s Pine and Red Oaks are over 100 years old, with bedrock ridges scattered throughout the property. The property supports a number of bird species of conservation concern too, from Eastern Wood-Pewee and Evening Grosbeak, to American Redstart, Black-and-White Warbler, Blue-headed Vireo, and Ruffed Grouse.

The new 40 acre site will add to three nearby properties already protected by the Nature Trust, and surrounding Crown lands awaiting designation as a provincial Wilderness Area. Its protection will help piece together almost 3000 acres of land trust and government protected rivers, lakeshore, wetlands and forests. This vast, interconnected habitat is critical so the turtles can find all the habitats they need to survive, and move safely between their feeding, nesting and overwintering sites.

With so few Blanding’s turtles left in Nova Scotia, and increasing threats, their fate is truly in our hands.