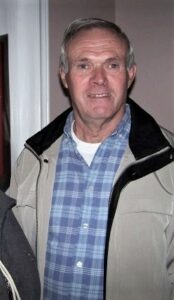 Wayne Ryder was born with a love for nature. He and his brothers all grew up on an isolated farm and loved heading into nearby woods, building camps, fishing and being in nature. Many years later, walking in the woods is still Wayne’s favourite thing to do. “I guess I never grew up,” he says jokingly.

At this point in his life, Wayne believes there is nothing more important than nature and protecting nature. He worries, “We are too quick to cut down trees or dig out gold, thereby destroying nature. But we need to be more focused on protecting it. Even if companies commit to repairing and replacing what was there before the mining or logging started, they will never be able to replace all the biodiversity that existed before.”

So when Wayne heard about the Nature Trust’s plans for protecting a keystone property in the Blue Mountain Birch Cove Lakes area he was thrilled. He has lived in that area since 1968 and still takes his grandkids hiking there—he says it doesn’t take much convincing for them to want to go.

So he made a generous first-time donation to the campaign but then decided to take things one step further. After consulting with his family, Wayne rewrote his will, and added the Nature Trust as one of the beneficiaries because, “There is nothing more important than trying to protect as much nature as we can.”

After working his whole life as an ironworker and then carpenter, Wayne felt he was now in a position to share his good fortune through this legacy gift in his will. “If we don’t save nature now, we’ll be saying, ‘In my day I remember when…’ about wild places that used to exist. If we don’t act now, we’ll only be able to talk about nature because it won’t actually exist anymore,” says Wayne.

So he is creating a legacy gift that will live on forever, in the hopes that generations to come will be able to enjoy the nature that has been saved for them.