Greg and Suzanne Amos: A Passion for Coastal Conservation

Greg and Suzanne Amos have been part of the Nova Scotia conservation scene since the early 1980’s. In addition to playing a key part of a team ensuring the protection of Gaff Point and Hirtles Beach, they have also supported the Nature Trust in many ways, from creating and donating donor recognition pieces through their company, Amos Pewter, to making a multi-year commitment to our campaign to protect Twice the Wild. We’re delighted to share their story as our Donors of the Month!

Suzanne was born in Nova Scotia and her roots here date back to the 1770s. “Nova Scotia abounded with raw nature when my earliest ancestors made the decision to come and settle,” she notes. “I am very aware of how quickly change can happen, resulting in an urgency to preserve at least some of what was so appealing to those who first lived off the land and those like my ancestors who joined them.” She was first in her immediate family to move back to the province, when she returned with Greg in 1974, motivated in part by his desire to surf. In those days, “coastal access was a breeze,” according to Greg. “It seemed like landowners didn’t mind when surfers were climbing over the shoreline. Then people started paying a lot of money for shoreline property and putting up barriers. That was very concerning. We need to continue working to make sure we don’t lose our access to coastal areas.” 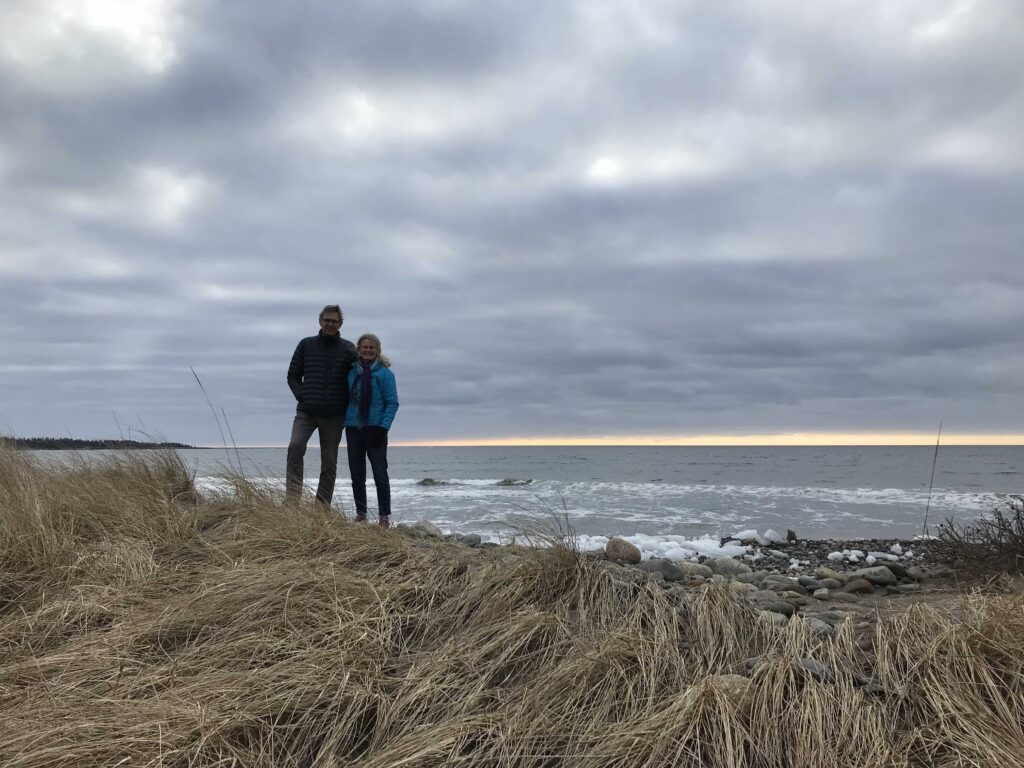 When they started to notice signs of development around one of their local beaches, they and a group of neighbours formed the Kingsburg Coastal Conservancy. At the same time, a similar community initiative was forming to protect the islands in Mahone Bay. “We realized that things weren’t going to stay the way they were unless we did something,” remembers Greg. The Nova Scotia Nature Trust was also in its early days, and communication began about how to proceed and partner in order to protect coastline along the Kingsburg Peninsula.

“We have been here since 1974,” explains Suzanne. “It takes a while for a community to develop a plan for saving what is valued.” Greg agrees. “These things don’t happen overnight. But all the while, consciousness is raised.” When they began their campaign, Hirtles Beach and Gaff Point were not particularly well-known destinations, even to people living nearby; now they see many more people enjoying the beach every time they visit. “It’s been interesting over the last fifteen years to see how remarkably popular Gaff Point has become,” says Greg. “Then the concern becomes, is it going to become spoiled with too much use and threaten the nature of the reason why it was protected in the first place? All of these things are so dynamic. I don’t know what the right answers are but I’m extremely pleased that people are enjoying these places.” The Kingsburg Coastal Conservancy continues its work in the region to this day. 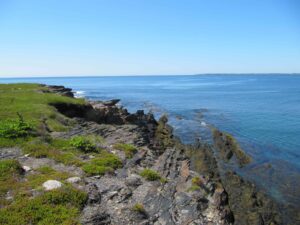 They also point to the long-term success of the partnership with and support of the Municipality of the District of Lunenburg. “That’s been noticeable over the past 25 years, and they deserve credit for that,” notes Greg. “There’s been a growing understanding in the community and beyond that we need to protect access to coastal Nova Scotia. That’s become more commonplace now, and I think landowners are more open to positive thinking about that, although we’ve got a way to go yet.”

Suzanne describes their longtime support of the Nature Trust as “a perpetuation and a broadening of our efforts with the KCC, broadening it to a provincial level.” In 2005, they created and donated a special donor recognition piece for Nature Trust Legacy Circle members, through their business, Amos Pewter. And while their passion for coastline protection remains a driving force, Greg also notes that what impresses him about the Nature Trust’s conservation portfolio “is not any one particular project but the scope that you’ve picked across the province: coastal areas, inland areas, rivers, valleys, oceanfront.” They supported 2019’s Lasting Landscapes campaign and made a multi-year pledge to the Twice the Wild campaign in order to lock in the four-to-one matching funds for several years. “This 4:1 business is extraordinary—how could you not try to quadruple your dollar?” exclaims Greg. “I’m so impressed that the Nature Trust put that together and is making it work. It does create a responsibility, and I think the Nature Trust is rising to that responsibility and securing some remarkable properties. We are thankful!” 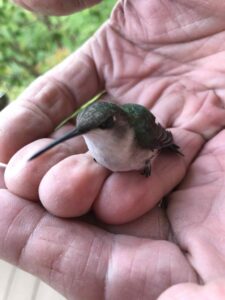 “I was doing some work on our porch and had half the windows out; she flew in and got a bit panicky trying to get back out past one of the windows that was still in place. I was able to get two hands around her and within seconds she had calmed down and seemed to enjoy having her picture taken! Made my day!” Photo credit: Suzanne Amos

Greg says that the Nova Scotia coast—and having access to it—has “just become part of who we are. We look out our window at a nice chunk of Nova Scotia headlands and a big island and salt water.” “As the years have gone past and the kids have grown up, we don’t  go to the beach as much as we used to but we really enjoy the view of the ocean from our hilltop property,” adds Suzanne.

Hearkening back to her Nova Scotian roots, Suzanne says, “I’m very cognizant of how tiny our window is to act. Things have changed a lot, in ten years, twenty, fifty, a hundred, two hundred years. It has been very satisfying for us to be able to contribute to the goal of ensuring that some of the few remaining places of natural significance are now protected.”

Please join us in thanking Suzanne and Greg for their longtime conservation efforts, their passion for coastal protection, and their continued support for the Nature Trust!