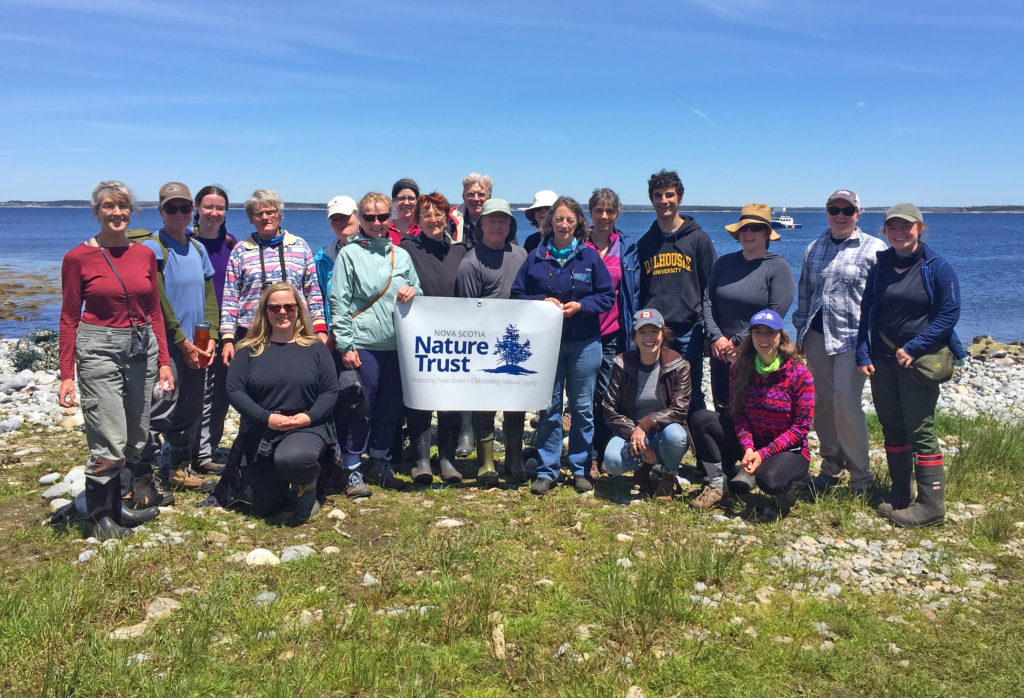 The Bon Portage stewardship crew - thanks for a magic weekend!

I read an article recently about seabirds being ‘ecological connectors’ because they connect sky, land and sea together through their migrations, foraging and nesting. Certain seabirds can also lead very mysterious lives – there are many species that spend the majority of time out of sight and at sea, only coming to land to nest. When they do come to land, it is typically on remote islands that are largely inaccessible to people. Over June 7-9, on a special weekend-long excursion to Bon Portage Island for our Connecting with Nature series of events, we were able to offer volunteers an opportunity to get a glimpse into the secret life of one species of seabird in particular—Leach’s Storm-Petrel (Oceanodroma leucorhoa).

This event was hosted in partnership with researchers at Acadia University. The university owns Bon Portage Island and oversees the Evelyn and Morrill Richardson Field Station in Biology, while the Nature Trust holds a conservation easement with Acadia that legally protects the island’s natural values. It is an ideal partnership and a win-win situation for both conservation and education! 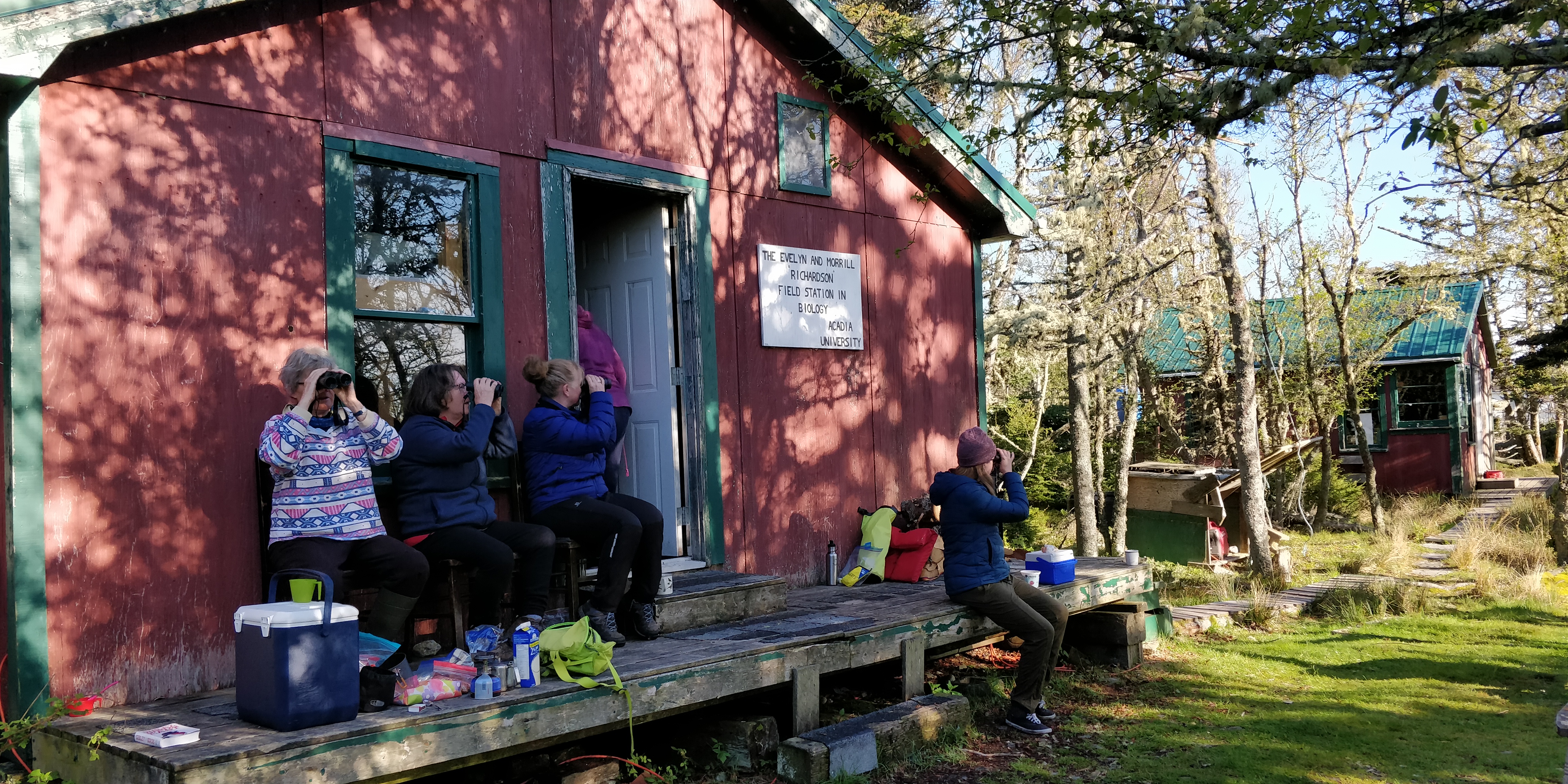 There’s always something to catch your eye at the Evelyn & Morrill Richardson Field Station in Biology. (Photo: Jeanette Jensen)

Bon Portage is considered to be an Important Bird Area (IBA)—an internationally-designated place of significance for the conservation of birds and biodiversity. It is a critical stopover for many migratory birds and home to numerous breeding birds, including the largest breeding colony of Leach’s Storm-Petrel in Nova Scotia (approximately 40,000 breeding pairs).

As with all of our conservation lands, we make a promise to take care of (or ‘steward’) these lands to ensure their conservation values are protected in perpetuity. The goals of the weekend-long stewardship trip were two-fold: 1) continue our mission and mandate to protect and steward the island and 2) engage volunteers in learning about seabird/coastal island conservation and hands-on stewardship work. 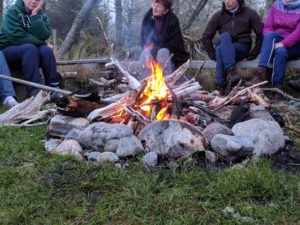 Campfire conversations — a cozy way to learn more about the secret lives of petrels.

Rielle Hoeg, an Acadia graduate student who studies the petrels (and who also helped us to organize the event—thank you, Rielle!), gave a campfire talk on the first night about the petrel research done on the island. We learned many facts about these tiny dark seabirds, for example, the oldest Leach’s Storm-Petrel ever recorded was 31-years-old and petrels only lay one egg per year.  Petrels are philopatric, meaning they are faithful to their burrows and typically return to the same one year after year. She mentioned that although little is known about the migratory routes of small seabirds like the petrels, some birds that have been tagged with geolocators on Bon Portage have been tracked to overwintering destinations off of southwestern Africa.  Some birds have even been known to stay up north and overwinter in waters off Greenland. Unfortunately, Leach’s Storm-Petrel populations have declined by approximately 30% over three generations, making conservation efforts at both their breeding colonies (as we have done on Bon Portage) and along their migratory routes extremely important work.

Later that same evening after Rielle’s campfire talk, volunteers got to experience the petrels for themselves when they returned to the colony in the veil of fog just after 10:30pm. The birds do not make an inconspicuous arrival back to their underground burrows, however, making a series of cackling and trilling noises as they return home. Listen here (call sounds at 5 seconds into the clip):

The next day started with a dawn bird walk led by our Land Stewardship Assistant, Joanna Skomorowski, and then it was time to get to work.

The stewardship work to be accomplished was to fix up the Petrel Trail that is used by visitors, students and researchers on the island. The trail is boggy and remains quite wet throughout the season leaving the boardwalks in disrepair. This posed a major risk of people having to step off the trail to avoid the wet areas, which could then lead to possibly stepping on a petrel burrow. We worked diligently and reused materials already on the island like leftover boards and washed-up driftwood to create bridges over the wet areas, as well as laid cobble rocks from the shoreline. The final product made for easier passage by people and a safer trail for petrel burrows.

While the trail work was going on, Joanna was able to get our annual island monitoring work done—a requirement for our conservation easement lands— with the help of volunteers Allison and Sherrie. 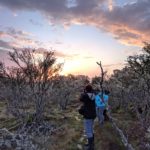 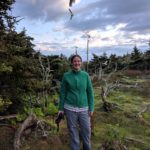 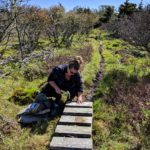 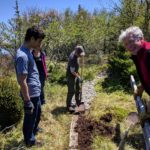 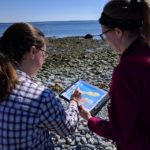 Our window into the lives of petrels was opened further that day when Rielle demonstrated the ‘grubbing’ of a petrel burrow—the technique used to conduct population surveys. The group got to get up-close and personal with a petrel, sniffing their musty smell and observing their distinct tubenose bill.

CBC’s Colleen Jones was with us the whole weekend capturing the story for TV, radio, and online news. I know for myself and many others on the trip, it was fascinating getting to see Colleen’s mobile journalism in action to tell the story of our Bon Portage stewardship trip and we even got to help out in the editing process. We also had Made with Local bars kindly donated to help fuel our volunteers! 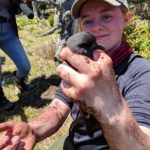 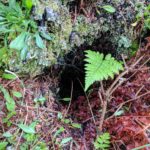 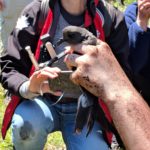 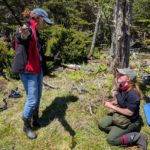 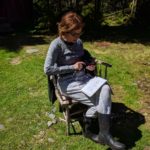 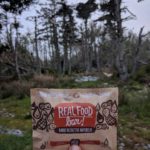 For the last night, we had the second talk in our campfire series done by myself and our Volunteer Coordinator Ryan MacLean on the Nature Trust and our coastal island work. Then, we enjoyed the fruits of our labour and travelled across the island on the Petrel Trail to see the sunset, while gazing across at Seal Island (a large parcel of which was recently protected through the Lasting Landscapes campaign—more to come on this!) and the Mud Islands. Like Bon Portage, these islands are also incredibly important to breeding and migratory birds along the Atlantic Flyway. 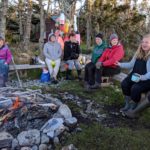 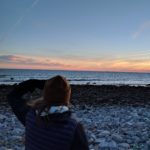 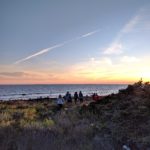 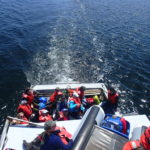 It was such a treat to spend an entire weekend in this immersive learning setting and having the opportunity to experience the ecological connections of seabirds for ourselves. Over the course of the weekend, these tiny dark seabirds were also human connectors, bringing together a group of people from all across Nova Scotia to share and learn from one another as we worked toward a common goal of coastal island conservation and stewardship.

We thank everyone who made this trip of a lifetime possible, including our incredible team of volunteers, partners at Acadia University, boat captains Lee Adams and Mike O’Brien, and our Connecting with Nature conservation champions (East Coast Credit Union, Maritimes & Northeast Pipeline, and Stewart McKelvey). 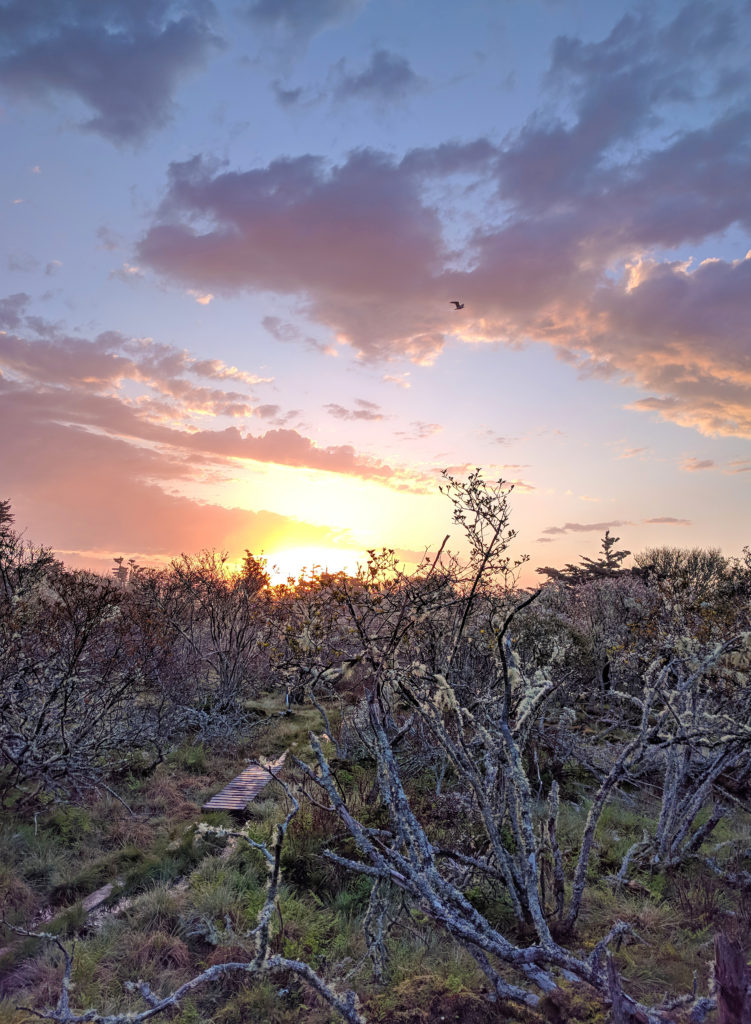