All the Way from Brazil: Office Volunteer Arlete Casagrande 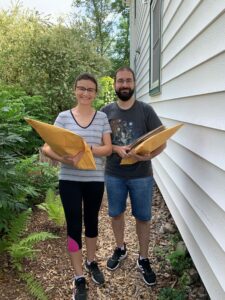 Arlete and Carlos at the Nature Trust office

Arlete Casagrande and her husband Carlos Gasparetto arrived in Nova Scotia from Porto Alegre, Brazil in July 2018. They’d had a good life in Brazil, with their own apartment, car and good jobs but living in a big city like Porto Alegre (population approximately 1.5 million) had its problems—the most critical of which was the violence.

“We always wanted to live in a house, to have kids, a dog, a backyard. But despite the fact that houses were very expensive in our Porto Alegre, we didn’t feel safe enough to buy one. Houses there have tall fences, many with electrified barbed wire on top, and we know many people who had their houses invaded, or were mugged or robbed at home. It’s a very different reality from here,” mused Arlete.

So why Nova Scotia? It was actually thanks to a TV show called “Canada Over the Edge” that the Nature Trust was lucky enough to have Arlete and Carlos join our team of volunteers!

On the show, the landscapes of the Nova Scotia were pictured and Arlete and Carlos fell in love with the scenery. Arlete also noted, on a more practical level, “We considered that Halifax has a mild climate compared to the rest of the country, and it’s a mid-sized city where we could have job opportunities combined with a more relaxed lifestyle.”

She went on to say that they had had a few countries in mind, but chose to come to Canada specifically because the government advertises the country as welcoming to immigrants, and in need of qualified workers. In addition to that, they felt that here they would be able to have the life they’d dreamed of having in Brazil.

It was Carlos who first learned of volunteer opportunities with the Nature Trust, but it was at a time when the organization was in the midst of moving offices, and Carlos was then quickly hired as a software developer for NTT Data. Instead, Arlete joined our office volunteer team. At the time, she was studying at NSCC and was looking for opportunities to engage with her new community. She reminisces, “As a newcomer, it can be challenging to get to know people outside of the academic environment. Volunteering helped me to overcome the emptiness and sadness of living in a new country, where you don’t know anyone. It gave me a purpose.”

In those pre-Covid days, Arlete would come into the 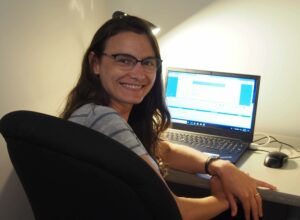 Nature Trust office one afternoon a week, helping out where needed. We came to depend on her help and look forward to the days she would be coming in. For her part, she says, “I liked to meet everyone involved with the Nature Trust, as well as learning about the work done by this organization to preserve nature. The people are warm and welcoming, and I learned a lot from them about Canadian culture and the work environment. The whole experience was wonderful.”

Arlete has now graduated from NSCC and recently joined IBM as a project manager. For one of her final assignments at NSCC, Arlete used the Nature Trust as a case study. She developed a complete program for updating hundreds of businesses across Nova Scotia on our work. Despite Covid arriving mid-project and NSCC cancelling this course requirement, Arlete continued on and completed the project in her own time. Even Carlos was drawn into the work, coming in to pinch-hit at the end.

Over this past summer, she and Carlos spent time exploring their new province—travelling to Cape Breton, and Lunenburg, and hiking Cape Split. Arlete reported, “We like to be outdoors, to be in the middle of nature, and it’s wonderful to know that there are many people dedicated to preserving natural wild spaces in our new home.”