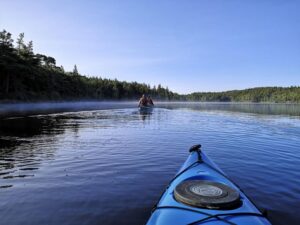 Setting out at Flat Lake on a calm Saturday morning. (Credit: Stephen Glazier)

It was looking like a promising day for a paddle as four volunteers launched into Flat Lake in Upper Hammonds Plains on the sunny morning of September 12th. Their destination: Long Lake, at the heart of the Nature Trust’s Blue Mountain Wilderness Connector – the focus of our Save the Wild Blue campaign to protect the560 acre gap in the middle of the much loved Blue Mountain Birch Cove Lakes (BMBCL) Wilderness.

The trip was led by Richard Vinson, a long-time supporter and volunteer with the Nature Trust, and Communications Chair for the Friends of Blue Mountain Birch Cove Lakes. Friends of BMBCL is a group dedicated to the realization of the long-awaited and much anticipated BMBCL Regional Wilderness Park. The group has been working hard not only to share news about our Save the Wild Blue campaign, but also advocating for the city to take steps to define a plan for the future park and to protect additional lands to contribute to the park. 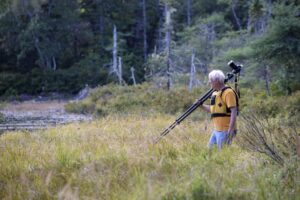 Joining Richard was another long-time supporter – photographer extraordinaire Irwin Barrett, who has long been exploring and documenting the BMBCL’s breathtaking beauty just footsteps from the city. Irwin has very generously allowed the Nature Trust to share his photography on many occasions, and we are excited to share what he’s captured in the Connector.

Rounding out the crew were Katie Studholme, a new Property Guardian Volunteer with us, and her partner Stephen Glazier, who documented the day with some fantastic photography of his own. As well as volunteering with the Nature Trust, Katie is assessing likely loon habitat in the BMBCL for Bird Canada’s Canadian Lakes Loon Survey Program. This program engages citizen scientists to help monitor loon chick hatch and survival. While it’s a bit late in the season to conduct the surveys this year, Katie was able to gather some valuable information on the habitat and accessibility of the lakes they visited. 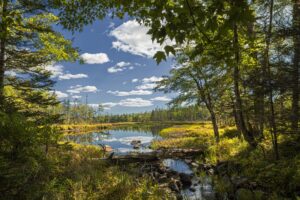 Looking down Long Lake near the portage route from Flat Lake in the Blue Mountain Wilderness Connector. (Credit: Irwin Barrett)

As the morning sun had promised, it was indeed a perfect day for a paddle. Together the team captured some stunning photography and collected valuable information to help us to better understand how to care for this important urban wilderness in perpetuity.

We’d like to extend our thanks to a neighbouring landowner who granted access to begin the trip at Long Lake, and to express our sincere gratitude to our adventurous crew – Richard, Irwin, Katie and Stephen – for spending their Saturday exploring the Wild Blue!